On February 2, 2022, the Saratoga City Council authorized a 1-year Automated License Plate Reader (ALPR) pilot program consisting of 7 cameras in partnership with Flock Safety. This ALPR system will capture images of vehicle license plates, then compare license plate numbers against law enforcement databases. If a plate matches a listing on a database, the system will alert the Sheriff’s Office so a deputy can be deployed to investigate.

Installation of ALPR cameras has started. Once all 7 City cameras have been installed, the 1-year pilot will officially start.

Subscribe to the City's Neighborhood Watch Newsletter to receive email updates on the status of the ALPR Pilot.

View summary information about the use of the City of Saratoga ALPR system.

Residents and neighborhoods with their own Flock cameras placed on private property have the option to enable sharing of license plate data captured on their private Flock cameras with the City’s system. The data can only flow one way to the City system; residents and neighborhood groups will never receive data or notifications from the City system. If a private Flock camera detects a license plate on a law enforcement database, the Sheriff’s Office will be informed so that a deputy can be deployed to the camera location for further investigation, just as they would if a match was captured by one of the 7 City of Saratoga ALPR cameras.

If you have any difficulties, email support@flocksafety.com, indicate you would like to share data with the Santa Clara County Sheriff’s Office and Flock will take care of the setup. You can also opt to share data with other neighboring law enforcement agencies.

ALPR camera locations for the City’s pilot program were selected in consultation with the Sheriff’s Office and Flock Safety. The locations below serve as entry points to the City on major arterial roads with adequate sun exposure to power the ALPR units. 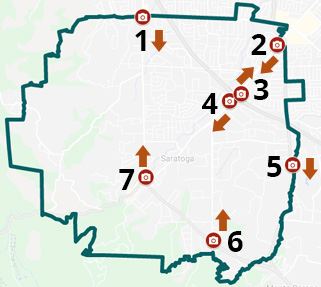 Response times will vary depending on current circumstances and the nature of the license plate match but are generally expected to occur within 5 to 10 minutes.

After the 1-year pilot period, the City Council will assess the effectiveness of the ALPR system and provide direction on continued use of ALPR or expansion.

All jurisdictions with an ALPR system are required to adopt a usage and privacy policy under State law. This policy is intended to limit access and abuse of ALPR data by identifying who will have access to data, how the ALPR system will be monitored, parameters for sharing ALPR data, measures that will be taken to protect the accuracy of ALPR data and retention of ALPR data.

A significant number of crimes are committed with the assistance of a vehicle. License plate numbers give the Sheriffs’ Office objective, actionable leads needed to help solve crime. Using ALPR cameras, detectives can pinpoint the suspect’s last known location which narrows down the search radius.

Flock Safety ALPR cameras go beyond capturing license plates. Unlike traditional license plate readers, the unique technology accelerates investigations by allowing the Sheriff’s Office to filter their search based on the vehicle’s specific characteristics, including body type, make, color, and more. This is key in producing an investigative lead for the Sheriff’s Office when a suspect vehicle has no visible plates or unique characteristics.

How does a Flock camera compare to other types of security cameras?

Flock cameras are optimized for license plate capture. Flock camera sensors are optimized for objects that are well-lit or illuminated by infrared technology. Standard Flock cameras have an intentionally short shutter speed (how long the camera is open). This setting allows the camera to wake up and start taking pictures in a fraction of a second, and to capture multiple frames of a car traveling up to 75 MPH. Flock cameras have an intentionally narrow field of view capable of capturing about one and a half lanes of traffic. Unlike an ALPR camera, a doorbell camera is optimized for surveillance — its settings are optimized for low light, and the shutter speed is slower. It captures non-reflective objects moving slowly (i.e., pedestrians), but not reflective objects moving quickly (i.e., cars and license plates).

Flock Safety has strict measures in place to protect resident privacy. All data is stored for only 30 days. Only Sheriff’s Office staff have access to the City of Saratoga ALPR data. Flock will never share or sell data with third parties and the Sheriff’s Office is the only one to determine who has access to the footage.  All data is stored in the cloud through Amazon Web Services (AWS) using AES256 bit encryption, a standard encryption system used by both the Federal Government and the National Security Agency.

Are Flock Safety cameras tied to any personally identifiable information?

No, the camera takes pictures of the vehicle while cross-referencing the license plate through the Stolen Vehicle System and Flock Safety Hot List. A second search in the California Department of Motor Vehicles database must be conducted by a deputy to identify the registered owner of the vehicle. Such a search requires reasonable suspicion as a deputy must have a right to know and a need to know prior to conducting such a search.

How will data be flagged for retention past the 30 days?

Within the Flock portal, all data will be automatically deleted when it hits that 30-day mark on a rolling pattern. If there is any data tied to a case or an active investigation, it would manually be taken out of the system by an investigating deputy. Data and images manually downloaded are treated as evidence and subject to laws, policies, and procedures that govern their use.

What is required for a deputy to conduct a data search in the Flock Safety portal?

Any time a deputy conducts a search in the Flock Safety portal, they will be required to enter a case number per department policy. Additionally, the deputy will have to give a    reason for the search. Each individual deputy will have their own login, so we will be able to audit each deputy’s activities as they go through the portal.

How will a deputy be alerted to a stolen vehicle?

Is an alert alone sufficient for an officer to stop the vehicle?

Why did the City select stationary ALPRs over mobile ALPRs?

How will you address cybersecurity related to the cameras?

Will Flock Safety cameras be used for traffic or immigration enforcement?

No. County and City policies are clear on the sharing of information. We will not share any of the data with any federal immigration agencies. Additionally, the technology for either traffic or immigration enforcement is not built into the solution. This is by design based on the fundamental beliefs of Flock Safety. The company is guided by its founding principle that it is possible to build technology that is effective for law enforcement to help solve and prevent crimes, while at the same time protecting a person's privacy and rights.

Will signage be installed at City ALPR camera locations?

Signage will not be installed at camera locations, but the City does plan to place temporary banners throughout the City on a periodic basis to announce the use of ALPR. Additionally, the City will be conducting outreach to encourage residents and neighborhoods to share their own Flock data with the City system.

Will the City have an online Flock ALPR Dashboard?

Yes, the City will have a public online Flock ALPR Dashboard that will provide the community with anonymized information about the use of the ALPR system.

Can the City use data from privately leased Flock ALPR cameras, such as those operated by a resident or Neighborhood Watch group?

Once the City of Saratoga’s ALPR pilot program goes live, residents or neighborhoods with their own Flock cameras placed on private property will have the option to enable sharing of license plate data captured on their private Flock cameras with the City’s system. The data flow is all one way to the City system; residents and neighborhood groups never receive data about when a license plate identified by a camera matches a license plate on a law enforcement database.

If a license plate detected by a private Flock camera matches a license plate on a law enforcement database, the Sheriff’s Office will be informed so that a deputy can be deployed to the camera location for further investigation just as they would if a match was detected by one of the 7 City of Saratoga ALPR cameras.

Can the feed from non-Flock cameras be integrated with the Flock System?

Unfortunately, the answer is no.

What is the best and fastest way to share private non-Flock video footage with the Sheriff’s Office?

The best and fastest way for residents to share footage from a non-Flock Camera is to call the non-emergency number (408.299.2311) and talk with a deputy about the footage.